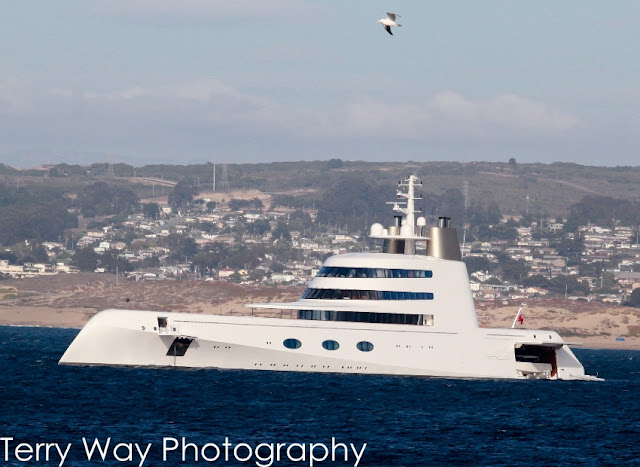 Saw this awesome yacht while shooting a wedding at The Monterey Plaza Hotel a little while back. Thought it was something out of a James Bond film. The November issue of Vanity Fair Magazine ran a spread on mega-yachts and had this to say about the 390 foot "A"
"Designed by French architect and designer Philippe Starck for a Russian client he calls "a genius of mathematics." His intention was design a yacht that was "organic, in harmony with the sea," as opposed to most super yachts, which he feels treat the ocean with arrogance.
This yacht cost more than $300 million to build and requires $20 million a year to maintain. According to the Wall Street Journal, there is 23,600 sqaure feet of living space, encased in bombproof glass. Three pools are inside including one whose glass bottom is visible from the disco below. Twin 24,000 diesel engines are capable of outrunning just about any vessel on the high seas. A crew of 35 tend to operations.